Rick Riordan, the author and creator of “Percy Jackson,” and his wife, Beck Riordan, initiated the #DisneyAdaptPercyJackson social media movement in 2020. As we now know, Disney is on the verge of officially approving “Percy Jackson.” Why is this being brought up now? Disney+, on the other hand, has a dearth of fantasy shows. Because the author of “The Inheritance Cycle” book series has made a huge push for #RemakeEragon, let’s take a look at how “Percy Jackson” may describe #RemakeEragon’s success. Except when addressing the #RemakeEragon movement, I shall refer to the “Eragon” series by the name of the franchise “The Inheritance Cycle.”

For those who may not recall, in 2006, 20th Century Fox (now 20th Century Studios) produced “Eragon,” a cinematic adaptation of the first novel in “The Inheritance Cycle,” which destroyed a vast number of aspects of the original book that made it so fantastic. Now, if Disney is smart, they’ll bring Christopher Paloni, the author of “The Inheritance Cycle,” on board to ensure that a film adaptation of his four-part book series stays as true to the original tale as feasible.

After the success of the #DisneyAdaptPercyJackson movement in 2020, many authors and their fans on social media began seeking for additional literary concepts that could be remade or given sequels; among of the trends I personally participated in included #GiveAlitaHerSequel and, of course, #RemakeEragon. The #RemakeEragon trend was significant enough to capture Disney’s notice, and it seems like they’re waiting to see how successful the “Percy Jackson” series is if it gets greenlit.

HBO’s “Game of Thrones” has demonstrated that there is a sizable market for such series to become global successes. Although Disney+ is home to ABC’s “Once Upon A Time” and its offshoot “Once Upon A Time In Wonderland,” the streaming service has yet to capture a significant portion of the fantasy television market. Disney has a number of projects in development that fit into this genre, including the “Willow” series, “The Spiderwick Chronicles” series, and the “Percy Jackson” series, and they might relocate some of their existing shows to Disney+, such as “Galavant,” to help broaden the genre’s appeal.

However, if “The Inheritance Cycle” is approved, it might be a major hit for Disney+. I believe Disney is holding off on calling up Mr Paloni until they see how well “Willow,” “The Spiderwick Chronicles,” and especially “Percy Jackson” do on Disney+. If Disney wants to compete with rival WarnerMedia in terms of big-budget fantasy properties, the “Percy Jackson” series is a perfect competitor to Warner’s “Harry Potter” franchise, while “The Inheritance Cycle” is a perfect family-friendly series that could rival HBO’s “Game Of Thrones” in terms of quality and audience.

Reason #5: Both Have Dedicated Fanbases

Both book series have been on the market for more than a decade, and during that time, “Percy Jackson” and “The Inheritance Cycle” have developed huge followings. Both properties’ film adaptations failed to win over fans, and their fanbases resorted to major social media campaigns to try to get Disney’s attention. Rick Riordan and Becky Riordan both endorsed the #RemakeEragon trend on their Twitter profiles, which is fascinating.

Both “Percy Jackson” and “The Inheritance Cycle” are franchises that we believe 20th Century Fox cheated on because the “adaptations” pulled away so much of what made the books wonderful in an attempt to compete with WarnerMedia’s popular “Harry Potter” brand. Disney currently owns the rights to both franchises, and Disney+ is the ideal platform for authentic adaptations. A television season of eight to twelve episodes can cover more ground than a two-hour film.

“Percy Jackson” has the potential to be a huge hit for Disney+, and maybe it will lead to Disney reconsidering other unsuccessful 20th Century Fox titles. Some of these franchises, such as “Diary Of A Wimpy Kid” and “Percy Jackson,” have already been revived by Disney. After the success of the #RemakeEragon social media trend and Mr Paloni’s call to his loyal fans to help make the series a reality, Disney would be dumb not to contemplate a reboot.

One thing is certain: Disney will be watching to see which series do well, and if “Percy Jackson” is a success, I see Disney taking “The Inheritance Cycle” with both hands. 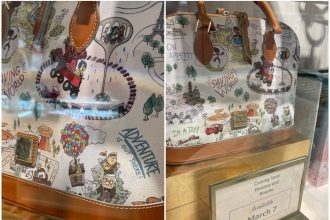 Adventure is out there with Dooney & Bourke’s Newest Purses 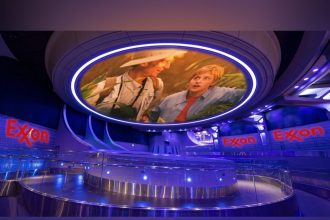 A Group of Guests Break into Disneyland and Flee